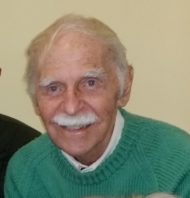 Frank A Weatherly, 90, of Lancaster, PA, died Friday, January 10,2020, unexpectedly, related to heart disease. Mr Weatherly was born at home in Brighton, PA on Sunday, December 8, 1929. He was the 5th of seven children born to James and Mary Scherer Weatherly. Frank’s given name at birth was Francis Albert Weatherly, but he never liked the name “Francis”. He had his first name officially changed to “Frank” shortly after graduating from high school.
Frank grew up in Beaver County PA, living most of his formative years in Beaver Falls. He attended St Mary’s Catholic grade school, then graduated from Beaver Falls High School in 1947. He pursued higher education at the University of Pittsburgh, graduating in 1953 with a degree in dentistry. Frank pursued a brief career in dentistry, asserting that his interest in dentistry waned after 2 years. Frank stated he and dentistry “just didn’t click”. His interest in music prevailed, leading to other career choices and opportunities.
Frank moved to Lancaster PA in 1959. He started giving piano lessons immediately after settling in Lancaster, as he had a passion and exceptional talent for piano. A few years later, Frank took a position at St. Anthony parochial school as a science, math, and music teacher. In 1974, Frank took a position at the Science Press Printing Company, with his work focus on technology and design. He had similar positions at Donnelley Printing, and Brenneman Printing. He retired in 2000 after many years at Brenneman Printing.
Frank was well known in Lancaster and surrounding communities for his musical talents. His ability to play piano, especially classical music, captivated and charmed his audiences. Frank started playing piano at the age of seven. At the age of 12 he developed an interest in violin. Through the years he became accomplished at not only piano, but violin and organ as well. By the age of 50 he cultivated expertise in seven musical instruments. He also directed the church choir at St Anthony of Padua Catholic church for 9 years. He directed St Anne’s Catholic church’s vocal choir for 31 years, and St Anne’s Bell choir for 10 years. He gave piano instruction to numerous students throughout a timespan of over 6 decades. He unceremoniously shared this musical talent in multiple venues; churches, schools, hospitals, nursing homes, in nearly all instances, through volunteerism.
In addition to music, Frank had multiple interests, among them included gardening, antiquing, cooking, painting, travel, reading, architecture. In 1980 Frank purchased a large, run-down empty building in Lancaster, previously owned and operated as a chocolate candy factory. It was Frank’s desire and mission to convert this defunct chocolate candy factory into his home. After years of hard work, trials, and tribulations, the chocolate factory transformed into a beautiful home, where Frank lived until his last day. His unique home was featured in the Intelligencer Journal, Baltimore Sun, Hickorytown Tours, and on a home renovation TV program. Frank was a previous member of many organizations, including the Knights of Columbus Mens Choir, the Wheatland Chorale, and a founding member of the TeDeum Chanting Singers. Frank instituted and nurtured the “Twelfth Night” celebration of local Catholic choirs. This was a long standing tradition of over 40 years where choirs performed their best Christmas music. He attended his final Twelfth Night celebration 1/5/20. He also was a previous member of the Men’s Garden Club, and the Lancaster Opera and Workshop. He not only acted as a tour guide for the Lancaster Wolf Museum, but also performed piano concerts there as well. Frank served on the Lancaster Cemetery Board of Directors. Frank was also a Lancaster history buff and a longtime tour guide for the Lancaster Walking Tour, serving on the board of directors for many years.
Frank was loved and cherished by many. Being in his company was a privilege and joy. He was a lively and knowledgeable conversationalist. His laughter was contagious. He treasured spending time with family and friends. His faith ranked of the utmost importance, strong and unwavering.
In addition to his parents, he was preceded in death by three brothers, Joseph, James, and Eugene “Jeep” Weatherly, his niece, Cindy Mickey, nephews Billy Weatherly, Raymond
Weatherly, Tom Weatherly, and great-nephew, Christopher Wall. He is survived by three sisters, Mary Weatherly, Pittsburgh, Patricia Sasic, Beaver Falls, and Rita Ruof, Baltimore. Also surviving are 15 nieces and nephews, and numerous great nieces and nephews.
A memorial Mass will be held on January 20th, 2020 at St Anne’s Catholic Church, 929 North Duke St., Lancaster, PA, at 11:00 AM. There will be a visitation from 10 – 11 AM at the church. In lieu of flowers, memorial donations may be made to The Sisters of Divine Providence, 9000
Babcock Blvd., Allison Park, PA 15101

I’m glad to had met Frank when I worked at Brenneman, always telling stories of how the house he lived in was an old chocolate factory, and whenever it rained it smelled of chocolate. Thoughts and prayers to Frank and his family.
Dustin

I was a student of Frank’s in the early 70’s.  He was always very patient and kind!  In later years, I sang with Frank in St Anthony’s choir. Love and prayers to all of his family at this difficult time.  Rest In Peace Frank!  You will be a welcome addition to the heavenly choir!
Anne Long Mavrides

My great-great grandfather Albert Hupper ownned and operated Hupper Candies located on the first block of East Orange Street in Lancaster and also had the candy and chocolate factory on East Madison Street that Frank bought in the eighties. On October 15th of last year my wife and I and two family members were walking to a nearby restaurant and I said we should check out the old factory that was nearby on East Madsion. Standing in front of the house/factory… the front door suddenly opened and a tiny man was standing there looking at us. I said who I was and that my great grandfather had owned this factory back in the day. He was very kind and invited us in for a tour. What we saw was amazing…and it all ended up with Frank playing a short meoldy on his concert-grand piano which I did a short video. It was an amazing day for this meeting with such an interesting man who converted this factory into such a beautiful home. I will always rememember this wonderful man.
Richard Hertzler

I first met Frank around 2005 through the Historic Lancaster Walking Tour.  We served together on its board for about 14 years.  Always with a warm smile and friendly greeting, he was a pleasure to know.  He had a extensive knowledge of and love for the history of Lancaster.  As a tour guide, he was an excellent ambassador for the city as he would show visitors about our town.  I am confident he will be organizing and giving tours of heaven.  God bless Frank.
Don Walters

I remember Frank as being a very kind generous gentleman. He and my Father, Joe Ransing, were good friends both through St. Anthony’s Choir and the printing business.  Frank’s talent will be greatly missed in the Lancaster area as well as his cheerful personality.
Josephine (Ransing) Rice

Mr. Weatherly!!! Honored to have had him as a teacher at Saint Anthonys. He always had a kind word to say, or offer support. Great memories. An awesome spirit. And his patience!! At times we were awful, but he never waivered. We were there to learn, and through him, we did. My prayers and thoughts are with the family at this time. Thank you Mr. Weatherly, we were listening.  Rest in Paradise.
Charmaine Williams

Frank was very accepting as St Anne’s choir director allowing this flat alto to sing. It was a privilege to have him play for my wedding in 1993. He also introduced me to the Lancaster Walking tours and instructed me as a guide. I am grateful that he was present in my life.

Frank was the first male teacher I had (at St Anthony’s school) for 3 years. I loved all his classes. Frank will be missed by many.
To a well rounded man, I say, “Rest in Peace.”
Condolences to family and friends.
Sincerely,
Stephanie Kane-Bootie

In the name of the Doris (Scherer) Stenger family, I want to offer my sincere condolences to Sr. Mary, Patricia and Rita and familiy.  May Frank experience the joys of eternal life.
Know that you are remembered in my thoughts and prayers,
Sincerely,
Sr. Carol Stenger, CDP

My deepest sympathy to the family and friends of a man I call ”Mr. Providence”.  It seems God sent Frank to earth to help us see the presence of a loving, Provident God.
Piece and blessings,
Sister Anne Winschel, CDP

WILL MISS MR  FRANK. HE WAS A GOOD FRIEND OF MY PARENTS  CARL AND ROMAINE FREY FROM ST ANTHONY’S.  FRANK WAS ALWAYS VERY INTERESTING AND VERY KNOWLEDGEABLE.  HE WILL BE MISSED
stephen Frey

Rest in peace, dear “Candy Man.”  It was a pleasure to visit your home and interview you.  You were a man of multiple talents. I believe St. Peter is looking for a Piano Man.
Marie Marciano Gullard