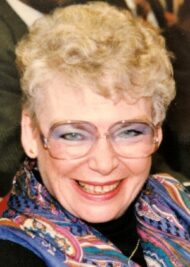 Elizabeth (Betty) Melville Cianci passed away on Friday, December 24, 2021 in Manheim, PA. Born in Pittsburgh, she was the only child of the late Robert and Mary Melville.

Her work experience began as a Congressional Secretary for Honorable William A. Barrett of Philadelphia for three years and as a legal secretary with the law firm of Kirkland, Fleming, Green, Martin & Ellis for four years.

After marriage to Salvatore (Sal) Cianci in 1957, a World War II Veteran and Government employee, they moved to Silver Spring, MD where Betty became a stay-at-home wife and mother. They lived in Silver Spring for 43 years where they raised three children; Jean, Chris (Sandy) and Donna (Eric). Sal passed away in 2020.

Betty volunteered as a Confraternity of Christian Doctrine (CCD) teacher in 1959 and went on to teach for twenty years at St. John the Evangelist Parish in Silver Spring, MD, serving as their Director of Religion for Grades 1 through 8 in the last 3. Betty also was active in the Glen Haven PTA and served in many volunteer capacities including PTA President.

In 1975, Betty rejoined the workforce as a part-time Secretary at the U.S. Nuclear Regulatory Commission. She later became a Management Analyst and finally a Personnel Staffing Specialist. Betty was also involved in the NRC Women’s Program and Toastmaster’s Club, where she served as President. She retired in 1994.

In 2000, Betty and Sal moved to their new home in Ocean Pines, MD. Betty became active in the Friends of the Ocean Pines Library where she served as Publicity Chair for eight years. With her passion for writing, she also became involved with the First Saturday Writers. She began writing for The Courier, a local Delmarva newspaper, in 2005. She most recently wrote a column entitled “Betty’s Corner” highlighting, among other things, local clubs and charities.

Betty’s favorite days in Ocean Pines were when family members visited, particularly her grandchildren: Angela, Michelle, Anthony, Nicole and Amber and great grandchildren: Jonas, Bennett, and Louie. Since 2000, Betty had been a member of St. John Neumann Church in Berlin, MD and St.John Neumann Catholic Church in Lancaster, PA.

Services will be private in Arlington National Cemetery where Sal and Betty will be laid to rest together.

Dear Chris and Sandra: I am sorry to read about the death of your mother Betsy. I knew her as a lady with dignity, class, and a love of family. She always had a smile on her face when having your dad by her side. Now we can all have a smile on our face knowing that Sal and Betsy are back again side by side in Heaven in the loving arms of Jesus our Savior. PLease let me know when the funeral or graveside service will be held. You have my email address. Tell your two sisters I am sorry too. Regards, Fred and Ethel O’Brien