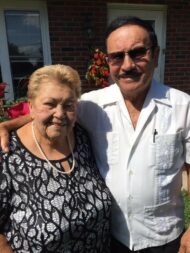 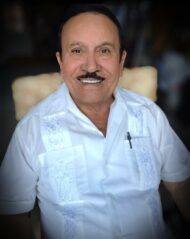 Eliseo “Tato” N. Roman, 83, of Lancaster, passed away at home surrounded by family on Wednesday, June 1, 2022. Born in San Sebastian, Puerto Rico, he was the son of the late Ramon and Felicidad Roman. He was preceded in death by his beloved wife Edelmira Roman in 2018 after sharing 60 years of marriage.
Tato worked for ITT in Lancaster where he later retired from. He was a devoted member of New Creation United Methodist Church for over 30 years and dedicated his life to serving God. He loved being a volunteer at the church and helped with clothing and food banks. Tato will be remembered for always having his pockets filled with mints and being able to bring a smile to people’s faces.
Tato is survived by 3 children: Nilda Serrano, Eliseo Roman, Jr., and Miriam Roman-Carvajal (Jorge); brother Samuel Roman (Matea), sister Blanca Tirado, 4 grandchildren: Randy, Sandy, Julian, and Julissa; 6 great-grandchildren, 4 great-great-grandchildren, and many beloved nieces and nephews. He was preceded in death by his parents, his wife, and 2 brothers, Ramon and Ulises Roman.
A viewing time for friends and family will be held on Tuesday, June 7 from 6-8 PM at Charles F. Snyder Funeral Home & Crematory, 3110 Lititz Pike, Lititz, PA. Visitation time will continue on Wednesday, June 8 from 10:30-11 AM at New Creation United Methodist Church, 10 W. Farnum St., Lancaster, with a service to begin at 11 AM. Interment will follow at Millersville Mennonite Cemetery. In lieu of flowers, memorial donations in Tato’s name can be made to his church, New Creation UMC.