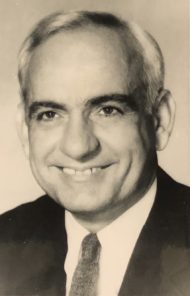 Earle was born in Buffalo, New York on January 4, 1928, and was the only child of Earle and Elizabeth (Simmons) Gay. He graduated with a Master’s degree from Columbia University. He proudly served during WWII with the United States Marine Corps. Earle continued to serve his country as a highly respected FBI agent in the field of International Intelligence. Once retired from the FBI, he founded Earle B. Gay & Associates, a prominent private investigation firm in New York City. After moving to Lancaster Pennsylvania, he consulted in that field until his death.

Earle was a member of the prestigious Union League Club of New York City. He was an avid reader and appreciated the arts, intriguing company, and good brandy. He will be remembered most for his wry sense of humor.

Earle was the husband of the late Lilia (Yordanov) Gay. He is survived by his loving daughter and grandson, Judith Gay Hemingway and Jordan Simo, of Annapolis Maryland. He is also survived by his stepson, Michael Welch, of Lancaster, PA. Services are private and will be held at the convenience of the family.

Any donations in his memory can be made to the Veterans’ charity of your choice.

Sorry to hear of Brooks’ passing.  Our mothers were cousins through the Simonassi family of Western PA. The families visited back and forth over the years soI knew him well.  He was two years older.  We had occasional contacts over the years, here, in Buffalo, New York and once a chance meeting in Monterey. my condolences for your loss.
William R. Casey

My deepest condolences. I have many fond memories of time spent with Brooks and Lilia in New York.
Karl Casey