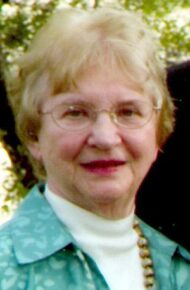 She met Austen Seward on a European vacation and they married in 1958.
In 1970 Austen took a job at the newly built Hershey Med Center as an Engineer and the family moved to a farm near Elizabethtown two years later.

The farm allowed her to indulge her passion in all things gardening including a small greenhouse for many exotic plants. Even after the farm was sold and she moved to Elizabethtown, she always kept flowers grown for cutting and house plants hanging everywhere.

When her mother-in-law was confined to a nursing home, she stopped to check on her every day after work. Emphasizing self-reliance and leading by example she was endlessly supportive of any and all adventures her children wished to pursue. Active and independent until nearly 90 she finally and reluctantly agreed to give up driving and moved in with her daughter for her final years. She was a terrific mom and will be greatly missed.

There is no public service planned. The family asks that in lieu of flowers, donations be made to The National Wildlife Federation www.nwf.org or Arbor Day Foundation www.arborday.org.