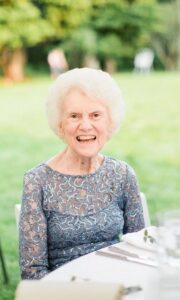 Dolores (Dori) L. Denuel, 90 of Elizabethtown, PA, passed away on Wednesday, December 22, 2021. The family wants to express their deepest gratitude to the wonderful caregivers that helped with her care over these last months of her life. Thank you, Lori, Desiree, Emilie, and Crystal for giving her such wonderful care with such kindness and respect which helped us to fulfill her wish to remain in her home.

Dori was born in Lancaster, PA, the daughter of the late Richard and Mary Ann Spangler, and was married to her high school sweetheart, Paul J. Denuel for more than 52 years prior to his passing in 2003.

Dori was a proud alumnus of Lancaster Catholic High School. She loved to tell everyone about being the head drum majorette at LCHS. Her greatest achievement though was the fact that she was able to attract the most handsome guy in the LCHS senior class of 1949 and Paul remained her one and only boyfriend for the rest of her life. We take solace in the fact that she is reunited with her one and only guy.

Dori and Paul began their married life together in 1951 on Pearl Street in Lancaster. They had four children: Linda Denuel Mellon (Vincent), MaryAnn Detwiler, Paul R. Denuel (Susan), and KathyMarie Denuel. Paul and Dori relocated three times during Paul’s working career and finally moved back to Lancaster County upon their retirement.

Their first move from Lancaster was to State College, PA where they both became life-long Penn State football fans and liked to tell people they went to church with the Paternos. Living in State College afforded them the opportunity to enjoy the excitement of living in a college town. Dori even worked part time at the University which she thoroughly enjoyed. We found in her possessions a letter of recommendation from Doctor Keddie which was glowing. He described her as an employee who brought intelligence, energy, conscientiousness, meticulous attention to detail and a sense of loyalty rarely encountered. In our mind these qualities describe how she lived her entire life.

Another word that comes to mind when we think of our mother is that she was a sassy lady. She was a petite woman but was always a giant character. While living in New Jersey she worked as a bookkeeper for twenty-eight years for Grove Associates. She took great pride in her financial skills and as a result her marriage was quite before her time for a girl married in the 1950s. Her children grew up seeing a mother who handled all the finances and a father who did all the vacuuming and much of the cooking. She was the 5’3”, light weight matriarch of the family. To her children it was quite shocking to find out that feminism was such a movement. In our home, there was no reason for that movement.

Dori also enjoyed her many friendships. She enjoyed lifelong friendships with her LCHS friends and enjoyed daily walks with her Elizabethtown friends whom she walked with every day well into her late eighties. One of the most important relationships she had throughout her life was with her hairdressers. In fact, one of the last people to come and visit her during her last week was her hairdresser, Tep Ly. Amazingly, she only stopped her lifetime once a week hair appointments two weeks before her passing.

Dori was the second oldest of six children. Her siblings included Mary E. Doerr, Rose Marie Mustard, Nancy M. Lusk, Richard L. Spangler, and Margaret A. Walls (Robert). She was preceded in death by her brother Richard and sister Mary. Her siblings were very special to her and in fact one of the main reasons she moved back to the Lancaster area was to be near them.

In lieu of flowers, please consider a donation in Dori’s name to one of the following organizations:

I just wanted to say what a beautiful photo this is of your mom.  That smile just melts my heart.  I am so very sorry for your loss, and thank you for allowing me to spend so much time with her this past year.  It has been one of the greatest joys of my life.  She was such a special lady and I loved reading about her life and her husband – it makes me happy thinking about them being together now. Peace and strength to all of you! XO

My sincere condolensces to the family and sisters of my Aunt Dori.  I will miss my Aunt and will always remember the good times and all of the wonderful memories we had at all of the family gatherings!
Love always,
Ro (little Ro)

Many special memories of Aunt Dory- she definitely was a sassy one!  Thoughts and prayers go out to her children (Linda, Mary Ann, Rick, and Kathy) in losing their mom and her siblings (Aunt Ro, Nancy and Aunt Peggy) in saying goodby to their second born Spangler sister.