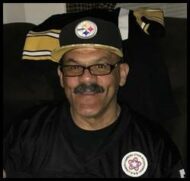 Dennis W. Crider 64, formerly of Chambersburg, Pa. passed away at his home in Lancaster, Pa. on Tuesday September 13, 2022.

Dennis received his formal education at Central High School in Chambersburg, Pa. He went on to enjoy a rewarding career as a custodian for the Chambersburg Area Senior High School which he retired after 14 years of service. He later relocated to Lancaster, Pa. and gained employment at Lancaster General Hospital as a Maintenance Lead where he also retired from.

In his leisure Dennis enjoyed fishing, playing softball, riding his bike, spending time with his family especially his grandchildren and without a doubt during the NFL season you would find him cheering on his Pittsburgh Steelers in full Steelers attire.