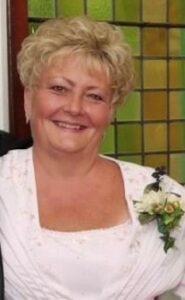 She was born Sept. 20, 1953, in Albany, New York, the favorite, and only, daughter of the late Keith and Florence (Helmes) Mattison. Her formative years were spent growing up in Ghent, New York, where she tantalized her younger brother, led the Chatham Central School cheerleading squad, sang in high school operettas, and hosted numerous “social gatherings” after home football games. She graduated from Chatham in 1971.

Prior to her early retirement due to health issues, Denise was employed as a health care administrator for several Pennsylvania hospital systems; these included Good Samaritan in Lebanon, Pennsylvania, and Penn Medicine Lancaster General in Lancaster, Pennsylvania — a job which she thoroughly enjoyed and to which she was truly dedicated. Her family was the most important thing in her life and always came first for her. She loved to travel and often referred to a cruise to Alaska as being her favorite trip. She was a talented crafter, acquired an extensive moose collection (not the real ones), and loved a specific style of jewelry (the collection of which could be seen from outer space). Denise was known and loved for her dry, witty sense of humor, an infectious laugh, and a smile that could light up a room.

A loving mother and grandmother, Denise is sadly missed by her daughter, Tara K. Casher and her husband Joshua, of Manheim, Pennsylvania, as well as her grandsons, Owen and Quinlan Casher. She is also survived by her brother Kevin Mattison and his wife Karen of Ballston Spa, New York; a nephew, Justin Mattison of Manchester, Connecticut; a niece, Kerri Mattison of Southport, North Carolina; an aunt, Judy Bervin of Glendale, Arizona; and several cousins. She is also survived by a dear friend, Joye Whittington, of Myerstown, Pennsylvania, who, along with Tara, saw to it that Denise never missed doctor appointments, never ran out of groceries, always had a shoulder to lean on, and an ear to bend. Joye’s unconditional friendship can never be repaid.

Services will be private at the convenience of the family. In lieu of flowers, contributions in Denise’s memory may be made to Kindred Hospice, 1891 Santa Barbara Drive, Suite 201, Lancaster, Pennsylvania 17601.

I have warm memories of working with Denise at Lititz Family Practice.  Her sense of humor and caring spirit left an impression on me.  My sincere sympathy to Tara and Joye.  Your dedication and loyalty are noteworthy.

I loved working with Denise at Lititz Family for several years. I loved her caring and humor! My heart felt condolences to Tara and Joye.

Tara and family, God broke the mold when he created your mother.  She would light up the room when we needed a push.  Love ya kid.

We know your heart aches with this huge loss.Our love,prayers and support are with you always. Love Mak and Jeff

Dear Tara and all of your family,
What a lovely Mom/Grandma you’ve been blessed to have in your lives. May God’s grace and your happy memories bring you comfort, now and always.
Sincerely,
Kate Millay

Sorry for such a great loss. Praying  for you and your family.
Rosemary Metzger