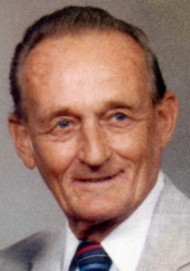 Daniel White Yoder, formerly of Shillington, PA, passed away suddenly on September 13th. A Mass of Christian Burial will be celebrated at 10 AM on Saturday, September 19, 2015 at St. John Neumann Roman Catholic Church, Lancaster, PA. Friends will be received at 9:30 AM.

Born on November 16, 1921, Dan was the son of the late Daniel and Iva (White) Yoder. He was a graduate of Governor Mifflin High School and Reading Business Institute and a veteran of World War II. In May 1947, he married Helen (Petzar). Dan worked as a cost accountant his entire professional career, retiring from Howmet Aluminum. He was a devoted husband and father as well as an avid sports fan and golfer who relished his friends at Overlook Golf Course.

He was preceded in death by his brother, Paul, and his son, Danny. Dan is survived by his loving wife of 68 years, Helen; his daughter, Janice (and husband, John Zipp); his son, Jim (and wife Pam Artz); and his seven grandchildren: Kate, Ted, Dan, Sam, Camilla, Addy, and Ricky.

Sorry for your lose. We associated with Dan here at the Long Community at Highland.
Ken and Elisa Munro