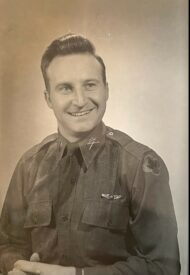 Clifford was born on July 28, 1924 in Seekonk, Mass. to Henry Louis and Anita (Theroux) Bergeron. He was raised in Attleboro, Mass. and graduated from Attleboro High School in 1943.

A proud military veteran, Clifford enlisted in July 1943 and served as an aviator in the U.S. Army Air Corps, where he cultivated a love of flying. He attended primary flight school at Lodwick School of Aeronautics in Florida, basic flight school at Bainbridge Army Air Field in Georgia and advanced training at Columbus Army Air Field in Mississippi. Clifford’s assignments included post-war Augsburg, Germany and he was awarded an Army of Occupation Medal (Germany). After being honorably discharged from the Army in August 1952, Clifford served in the R.I. National Guard and retired as a Major in 1967. He spent his civilian career as an engineer at Grinnell Fire Protection Systems.

In the service, Clifford caught the eye of an Army nurse named Jannette “Jan” MacKenzie (Andrews) Bergeron and they were married 67 years before her death in 2018. They raised their three daughters in East Greenwich, R.I. and Warminster, Pa. before retiring to Lititz in 1989. A Rhode Islander at heart, Clifford regularly summered in Jamestown and was an early member of the Wickford Yacht Club.

Clifford is survived by his daughters Patricia Dupuis (Donald), of Bordentown, N.J., Lorraine Bergeron, of Jamestown, R.I., and Carolyn Bergeron, of Vienna, Maine, and his loving granddaughters Emily and Allison Dupuis and Andrea and Sarah Croak. In addition to his wife, he was preceded in death by his parents and his three siblings, Leo Bergeron, Florence Bergeron and Normand Bergeron, as well as his doted upon Yorkshire terrier Mac.

Services will be held at the convenience of the family.

Lorrie and family,
So sorry to hear of your loss.
Patricia Haley