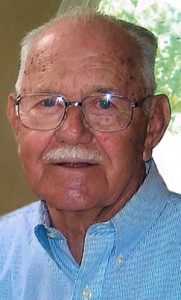 Chester H. (Ted) Geib, 96, formerly of Elizabethtown, peacefully passed away on Friday, August 8, 2014 at the VA Medical Center, Lebanon, PA. Ted was born on October 15, 1917, in Strasburg Twp. to the late Chester A. and Anna Mowrer Geib. His loving wife of 70 years, Marie T. Shoemaker Geib, passed away in March 2012.
Surviving are two daughters, Ann Marie, wife of Donald L. Hostetter of Lancaster and Sharon Lynn, wife of Robert L. Smith of Holtwood; five grandchildren: David Hostetter, Michelle Marchant, Christine Martin, Matthew Smith and”¨Julie Scherer; eight great-grandchildren: Sienna Hostetter, Jack & Reagan Marchant, Lily & Abigail Martin, Keaton & Piper Smith and Justin Scherer; a sister, Dorothy Herr and a brother, Richard Geib. . He was preceded in death by his brothers: George, John, Robert, Harry, and William Geib, and by his sisters: Mabel Kilhefner, Ada Erb, Mary Baker, and Agnes Hess.
As a member of “The Greatest Generation,” Ted proudly served in the United States Army during World War II as a Corporal in the European Theater of Operations. He was stationed in Albuquerque, NM before being deployed over-seas, where he bravely fought for Company C 51st Armored Infantry Battalion as part of a task force for the 4th Armored Division.
Ted was a hardworking, multi-talented man who was always happy to lend a helping hand to anyone he met. In addition to being a devoted husband, loving father, grandfather, and great-grandfather, Ted enjoyed hobbies including woodworking, gardening, hunting, and following the Phillies. He also enjoyed attending all the grandchildren’s and great-grandchildren’s sporting and extra-curricular events. Ted was a member of the Elizabethtown Church of the Brethren. He was loved by many and will be greatly missed.
A Graveside Service with Military Honors rendered will take place 11:30 AM, Friday, August 22, 2014, at Riverview Burial Park, S. Duke St., Lancaster, PA. Relatives and friends are invited to meet at 11 AM on Friday at the Charles F. Snyder Jr. Funeral Home & Crematory, 3110 Lititz Pike, Lititz, PA 17543 for the procession to the Cemetery. In lieu of flowers, memorial contributions in Ted’s memory may be made to the American Heart Association, 610 Community Way, Lancaster, PA 17603 or Pennsylvania Wounded Warriors, Inc., 1117 Country Club Road, Camp Hill, PA 17011.

To the Family…Know that you are in our hearts and prayers during this difficult time. Your dad, grandfather and great grandfather is now at peace and remembering All of you with smiles!! May our Loving God be his comfort and yours, Judy & Leroy