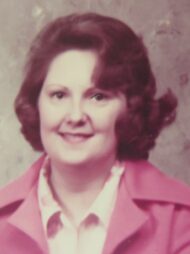 Carol Ann Ziegler went to join her Lord and Savior on January 7th 2022 following a 50-year battle with severe Rheumatoid Arthritis which left her physically disabled for the last 40 years of her life. Born January 8th 1946 in Tamaqua, Schuylkill County, PA, she was the daughter of the late Albert and Florence Thomas. She graduated from Tamaqua Area High School in 1963 and became a licensed Cosmetologist in 1964. Carol married her husband, Daniel C. Ziegler on September 25th 1965 and moved to Lancaster, PA where she became a licensed Teacher of Cosmetology at Emile’s Academy in Lancaster. In 1969 Carol chose to become a stay-at-home mother and wife following the birth of her first of two children. Her intent to later return to teaching was permanently derailed by her rapidly progressing illness. Carol was an inspiration and encouragement to everyone she encountered along life’s journey due to her positive attitude and love of her Lord. She became known to many as “the bionic woman” due to the myriad of surgical implants she received. Carol was a member of Millersville Bible Church.

Surviving, in addition to her husband of 56 years, are children Mark D. Ziegler and David T. Ziegler of Millersville, PA. Carol and her family would like to acknowledge and thank the many medical professionals who helped her to negotiate life’s journey as well as her extended family, many friends and fellow church members who provided constant help and encouragement over the years.

A funeral service will be held at 11 AM on Saturday, January 15 at Charles F. Snyder Funeral Home & Crematory, 441 N. George St., Millersville, with greeting time beginning at 10 AM. Burial will be held at Millersville Mennonite Cemetery following the service.

Carol was a great servant of the Lord and always very pleasant in spite of her pain.  I am sorry I did not learn of her passing until this morning, or I would have come to the service.  May the Lord continue to grant  Dan, David and Mark his peace and strength.

Dan, I saw Carol’s obituary this morning and am so sorry for your loss. Certainly she is now done with her earthly pain and is in a wonderful place now, but after 56 years together, I am sure it is painful for you to be without her here. God bless you and your family.