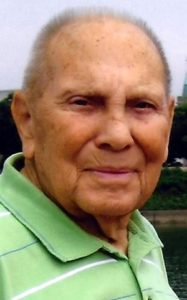 Carl W. Garber, 88, of Lancaster passed away peacefully on Sunday, June 5, 2016 at Evergreen Estates in Lancaster. Born in Staunton, VA he was the son of the late Harry O. and Margie B. (Wimer) Garber. He was the husband of the late Betty R. Garber who passed away in 2012.
He worked as a tool & die maker for the former Hamilton Tech and Bulova Technology companies for over 48 years.
Carl was a member of F. &A.M. Lodge #43 of Lancaster, Harrisburg Consistory, and the Lancaster Lodge of Perfection. He proudly served in the US Army during WWII.
Carl was the last of his immediate family but was cared by the entire family of Jeff Sauders for many years. In addition to his parents and wife he was preceded in death by his two brothers, William and Bernard.
A Funeral Service will be held Friday, June 10, 2016 at 2PM at the Charles F. Snyder Funeral Home & Crematory, 414 E. King St, Lancaster, PA 17602 with Rev. David Kreider officiating. Friends will be received from 1PM until 1:50PM at the funeral home. A Masonic Service will be held at 1:50PM. Carl will be laid to rest beside his wife, Betty, at Conestoga Memorial Park. In lieu of flowers, contributions in Carl’s memory may be made to AseraCare Hospice, 280 Granite Run Dr, Suite 180, Lancaster, PA 17601.

Dear Jeff & family,
Carl was a special person.  His gift of humor, caring and forgiving spirit warmed and brightened the day of those around him.
He is missed.
I am grateful that God gave me the opportunity to know him.
My prayers are with you as you miss him that God will comfort your hearts.
Sincerely,
Janet Sahawneh