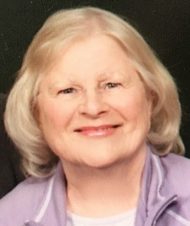 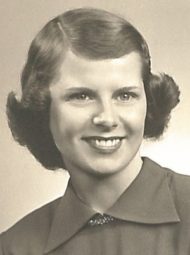 Bonnie L. Walmer, 90, formerly of Elizabethtown, passed away peacefully surrounded by her family on Tuesday, January 16, 2018, at Luther Acres Manor in Lititz, after a lengthy illness. She was a long-time member of Christ Evangelical Lutheran Church in Elizabethtown.
Bonnie was born in Fannettsburg, PA in 1927, the second of 10 children born to the late John and Dorothy (Little) Hogan. She was predeceased by all but her brother Barry Hogan of York. Her brother Bill Hogan passed away on the same day as Bonnie.
Bonnie was a graduate of the Fannettsburg High School Class of 1945. After graduation she moved to Elizabethtown and worked first at the State Hospital for Crippled Children and later at the NonRetailing Store in Lancaster. In 1951 she married Jay F. Walmer. Jay enlisted in the US Airforce and the couple moved to the Chanute Airforce Base in Rantoul, IL for 4 years before returning to Elizabethtown.
In addition to raising their four children, Bonnie was a Brownie Girl Scout Leader, a member of the church choir and a Sunday School teacher. She served as a Republican Committee Person for Ward III, and volunteered at the Elizabethtown Public Library. She was also a member of the Women’s Republican Club of Lancaster, the Elizabeth Hughes Society, the Lancaster Garden Club and the Auxiliary to Lancaster General Hospital.
Bonnie and Jay were married for 66 years until Jay’s recent death in November 2017. They are survived by their four children, Diane L. Romig of Elizabethtown, Lisa W. Strickland (Scott) of Stevens, Mark F. Walmer (Jill Brocious) of Lancaster, and Lori E. Suiter (Mark) of Paradise. Also surviving are 9 grandchildren and 9 great-grandchildren.
Services will be private at the convenience of the family. In lieu of flowers, memorial contributions may be made to Christ Evangelical Lutheran Church, 75 E High St., Elizabethtown, PA 17022.

Sorry to learn about your mom.  Of course we know your dad a bit better, but got to know her through him.  She was always very friendly to us and an interesting person.  Both your parents had good impact on our lives.  they will be missed.
Craig and Linda Coble

I happened to see your mother’s obituary in the Lancaster newspaper.  Bonnie, Jay, Diane, and Mark were neighbors of mine in Elizabethtown when I was a child;  Diane, Mark, and I were playmates.  I’m so sorry to read that you’ve recently lost both your parents.  I remember them fondly.
Joan (Hindman) Kyler

My thoughts and prayers are with your family at this time of loss. The heavens are brighter. God bless.  Marvin Boyer