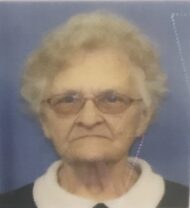 Bernadine A. Donnelly, 90, of Mountville, passed away on Wednesday, September 14, 2022, at Hospice & Community Care in Mount Joy. Born in Pittston, PA, she was the daughter of the late Albert and Frances (Armalus) Grabosky, and the wife of the late Edwin Eby Donnelly who passed in September, 2012.

Bernadine was a loving wife and mother who devoted her time to her home and family, which was her highest priority. She loved to cook and entertain, especially for the holidays. She enjoyed crocheting, playing cards and doing puzzles.

Services will be private at the convenience of the family. Bernadine will be laid to rest with her husband Edwin at the Sadsbury Friends Burial Ground in Gap, PA. In lieu of flowers, contributions in her memory may be made to Hospice & Community Care, 685 Good Drive, Lancaster, PA 17604-4125.

I’m so sorry for your loss.  Aunt Bernie was a wonderful and fun loving woman.  RIP Aunt Bernie