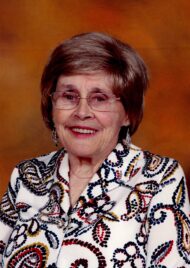 Barbara K. Walsh, 91, of Mennonite Homes, passed away, Tuesday, October 5, 2021. Born in Lancaster, she was the daughter of the late Raymond and Bertha (Weber) Henderson. She was the wife of the late Leo M. Walsh.

Barbara attended J.P. McCaskey High School. Of the Catholic Faith, she was a parishioner of St. Philip Catholic Church, where she also belonged to the Guys and Dolls Seniors Club. Barbara loved traveling with her late husband, Leo and was an avid reader. She enjoyed playing bingo and loved bird watching. More than anything, Barbara cherished the time she spent with her family.

Services for Barbara will be private, and she will be laid to rest with her husband, Leo, at Millersville Mennonite Cemetery. In lieu of flowers, the family requests that contributions in Barbara’s memory be made to Mennonite Home Communities, 1520 Harrisburg Pike, Lancaster, PA 17601 or to Hospice & Community Care, PO Box 4125, Lancaster, PA 17604.

So sorry to hear of your Mother’s passing.  She was such a dear soul!  As much as my Dad teased her, she never got mad, but gave it right back to him!!  It is so hard to lose a parent as we have never known life without them.  I know you were a devoted daughter and so faithful in visiting.  She was blessed to have you.  Treasure your memories and she will always live within your heart.  Many prayers and love go out to you Sharon.
Judy Kline