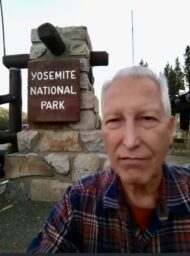 Arthur “Art” L. Young, Lititz, passed away Sunday morning, May 29, at home after a strong-willed and courageous battle against chronic health issues of many years. He was 67.

An avid outdoorsman, kayaker, bicyclist and hiker, Art was a member of the Lancaster Hiking Club for over 20 years, whose members he considered as his second family. Many weekends were spent traversing and tenting in national and state parks, and organizing and participating in Hiking Club events and social gatherings.

Art had a passion for Native American culture and history. He considered one of his most important contributions to recognizing indigenous peoples in Lancaster County his years’ long restoration and caretaking of a forgotten grave site of a Conestoga Indian couple from the late 1700s. Art’s project to restore dignity and sacredness to this site was featured in LNP’s The Scribbler column: https://lancasteronline.com/news/local/the-scribbler-penn-twp-man-memorializes-2-native-americans-who-lived-out-days-on-hershey/article_68b9327c-c08b-11e6-acb4-ab619d33112e.html

Art worked as a pressman for 27 years at R. R. Donnelly, Lancaster, before health issues forced an early retirement in 2012. According to Art’s wishes, there will be no viewing or funeral at this time. A Celebration of Life is planned for Sat., Oct. 8, 2022, on the weekend of Columbus Day (Indigenous Peoples’ Day). Details will follow in a service announcement to be published in late September. Assistance with Art’s arrangements is being provided by Charles F. Snyder Funeral Home & Crematory, Lititz. Memorial donations in his honor may be sent to assist Art’s vision for a pavilion/gathering place for the Lancaster Hiking Club and may be mailed to: Lancaster Hiking Club Pavilion Fund, P.O Box 7922, Lancaster, PA 17604.

I’m so glad sandy and I got to spend quality time with you over the last few months.  Always enjoyed our talks and the stories we shared.   I will miss you very much..

Art was an amazing man and Chet and I were priveledged to know him and spend time with him. We enjoyed hearing his passion for the Native Americans. He was a great grounds keeper for the gravesite of the Indian couple that was buried in the meadow of Kreider Farms. In the end he showed us all what a brave and courageous man he was as he faced death head on. He is a friend who will be greatly missed. Love, Chet abd Sharon Beiler