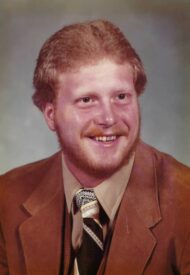 Andrew Todd Lackey passed away on July 13, 2022. Born in Princeton, New Jersey to the late James B. Lackey, Sr. and Rosemary Andrews-Cooper, they moved to Lancaster and Andrew graduated from Lampeter-Strasburg High School where he played football and wrestled.

After high school, Andrew learned the fine craftsmanship and art of carving. He became a stone mason and worked for several masonry companies. Andrew was also an accomplished artist. He most recently worked at the McDonalds in Willow Street where he was greatly cared for by his coworkers. Andrew had a kind and gentle soul and was most grateful for his life recovery from addictions.

In addition to his father James B. Lackey, Sr., Andrew is preceded in death by his brother Edgar B. Lackey.

A Celebration of life will be held at a later date at Chestnut Level Presbyterian Church in Quarryville.

Donations in Andrew’s memory can be made to the “Restore His House” campaign of Chestnut Level Presbyterian Church.

I was so sad to hear the news. He was a great co worker and always held the door and had a joke ready. we will all miss him dearly. – ellie and kayla

Rest in peace Todd. You were always so nice in high school. Sympathies to your family and friends.

So sorry to hear about Todd. He was always a nice fun guy in high school. it sounds like he will be missed by all the people in his life these days. Prayers to the family and friends.
Joan (Cummings) Leardi

Rest In Peace brother, will always be in my childhood memories, along with both your brothers
Sean Armstrong