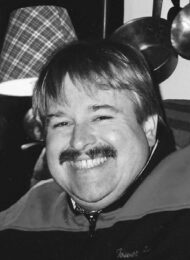 He is survived by his wife, Bonnie (Foust) Smith, of Ann Arbor, MI.

Andy was accomplished both professionally and in his interests. He earned two Bachelor Degrees, one in the Arts from Elizabethtown College and the other in Science with honors at Penn State University; and he also earned a Masters in Marketing and Management from the University of Michigan, Ann Arbor, MI. He applied his skills as a talented engineer for nearly 30 years at the Ford Motor Company. While working there, Andy earned both the Powertrain Customer Service Award and the Customer Driven Quality Award, not to mention several other awards, acknowledgements, and contributions he made in the industry.

At an early age, Andy developed a strong love for rail racing, now known as slot car racing, and it was a passion he carried with him throughout his life. He won awards, broke records, and received honors over several decades for his achievements in slot car racing. After retirement from Ford, Andy donned the moniker “Professor Motor” and opened his own business catering to his fellow slot car enthusiasts.

Andy you were one of the best. Peace be with all of us….somehow. Nelson Swanberg

I will always remember good times with Andy. Please accept my deepest condolences.

To Oliver and all of Andy’s family and loved ones. My condolences for the loss of Andy. Mary and I will be praying for all of you in your time of grief and celebration. Please find comfort in the love you share amongst each other and allow faith and hope to light your way.

Our family send it’s deepest condolences, comforting hugs, and love to the Smith family.  Andy is the father of our son-in-law, Tim Smith.  Tim is one of the finest men we have met, a wonderful husband and father, which says a lot about Andy and Bonnie. We are grateful to have shared many good family memories with Andy during our family gatherings, births of grandchildren, and hundreds of events throughout the past years.  His presence will be missed, but will live on through his love and memories of family.

Big Brudder will always be remembered as a sweet, loving father, brother and funny caring person. Toni and I have the fondest memories of his genuine love for his Bonnie Bunnie, his children and grandchildren and the amazing passion for all things Slot Racing. The “Professor” will always be with us in our hearts.

Sending blessings to Andy’s family and friends. He will be remembered always for his accomplishments in model car racing.