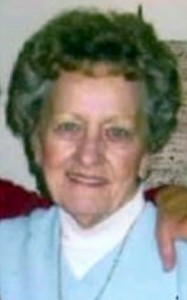 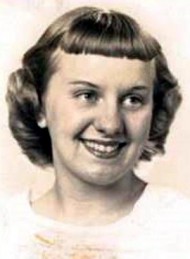 Marion Elizabeth Rachkoskie Yunginger, 82, formerly of Lancaster, passed away peacefully on Monday September 29, 2104, at Moravian Manor. Born in Shamokin, she was the daughter of the late Adam and Mary Rudan Rachkoskie. Marion’s husband of 59 years C. Norman Yunginger died in 2010.

A very proud graduate of Coal Township High School, “The Purple Demons,” in Shamokin, Marion worked at RCA where she met Norman. She also worked as a sales associate at Watt & Shand and Next to New, from where she retired.

She was a member of St. Anthony of Padua Catholic Church. Marion was a devoted mother and grandmother who dearly loved her family. Her passion was anything to do with Christmas and treasure shopping. She loved listening and dancing to Polka music and painting when she was able.

Marion is survived by 3 daughters: Coleen Adams and Ray Adams, Melissa, wife of J. Richard Hess and Christine, wife of Kevin Hess; as well as 6 grandchildren: Jenna, Sarah, wife of Walter Wimer, Rachel and partner Brent Hodge, Elizabeth, Madelyn and Adam; 4 great-grandchildren: Koen, Ella, Eden and Kylie; and her sister Dolores, wife of Joseph Huxta. In addition to her husband Norman, Marion was preceded in death by her brothers Joseph and John Rachkoskie.

A Visitation will take place 10-11 AM, followed by the Funeral at 11 AM on Saturday, October 4, 2014, at the Charles F. Snyder Funeral Home & Crematory, 414 East King Street, Lancaster, PA 17602. Interment in Laurel Hill Memorial Gardens, Columbia, PA. In lieu of flowers, memorial contributions may be made to St. Jude Children’s Research Hospital, 501 St. Jude Place, Memphis, TN 38105.

I’m so very sorry for your loss of your dear Mother and Grandmother.  You have my deepest sympathy.
DJDunn

Dear Marion’s Family,
It was such a joy to room with Marrion at Moravian Manor. We shared many laughs and many stories. she was a gem!
Jo Jacobs(and Diane)
York, Pa.

Marion was a good friend to her neighbor, Gertrude Marks.  They enjoyed many talks about working at Watt & Shand and all the good times they had. She will be missed by many especially by Gertrude.  God bless all of you.  Much sympathy, Linda Fetter

Thinking of you and your family Colleen. May your mother be at peace.

Condolences on the passing of your mother.  As a Moravian Manor volunteer, I so enjoyed talking with her.  We talked on Monday, the last time that I saw her.  Your mother was missing her last roommate Jo.  She was wondering who would be her next roommate.  I said that perhaps God had a plan for her future roommate.  I next commented on her picture of St. John Paul.  I know that she so loved him.  She had this special connection with him due to her heritage.  Pat Smith