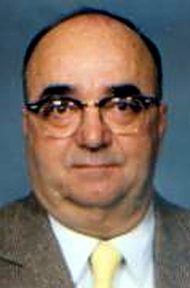 George S. Resch, 87, formerly of North Broad Street, Lancaster, passed away Thursday, November 24, 2016 at Conestoga View. He was born in Lancaster to the late Raymond C. and Mabel Huzzard Resch.

A US Army veteran of the Korean War, George served as Private with Company A 31st Engineer Battalion at Camp McCoy, Wisconsin. He then worked for Armstrong World Industries for over 43 years. George was a member of the United Rubber Workers of America Local 285 and the Mount Joy VFW Post 5752.

He was a member and former Trustee at Christ United Methodist Church, Lancaster. George loved hunting, his Beagles and cooking.

To George’s family,
I am so sorry for your loss.  I remember seeing George (and your mom) on the balcony of your house from my back yard.  He was always nice to us.  Mary Rose, I believe you are the same age as my younger sister, Dee Dee.  Good times in the old neighborhood.
I will pray for your father.  May he rest in peace.
Fran Lombardo Spangler